Will there be another Dot-com bubble in years to come? Similarities of the current market situation to the events that happened 20 years ago

If you were at least somewhat interested in the IT industry, then you probably heard about the dot-com bubble of the ’00s. The burst resulted in a long and hard recession in the sector.

In case the events of 20 years ago got erased from your memory, we’re posting this article to quickly remind you how things unfolded.

“Dot-com” is an industry-specific term for any Internet company (a so-called intangible asset). Such businesses appeared in the early 90s and reached the peak of their popularity at the turn of the century as market value of such companies had grown exponentially.

From 1995 to 2000, the index of NASDAQ stock exchange (where IT companies are traded) rose fivefold. The growth was especially prominent around the late ’90s. But soon after such a quick and beautiful take-off, it fell at the same rate right in front of investors’ eyes.

So what was that all about?

A dot-com bubble is an economic situation when the stock prices are gravely overestimated in comparison to their intrinsic value.

Investors not only were clueless about the state of affairs in IT companies but also ignored their true value in pursuit of their delusions. That caused the index of the largest ETF to fall 78% from its peak.

It took almost 15 years for the NASDAQ index to recover. Only in 2015 did it reach its former heights and break the old record.

However, as soon as it happened, people started arguing whether history could repeat itself. Experts, experienced and amateur investors, opinion leaders, and representatives of large IT companies are worried that the bubble might burst again.

In 2021, startups were growing by leaps and bounds. Coronavirus, the worldwide shift to telecommuting, and the digital transformation of offline businesses have boosted young companies that offer innovative technical solutions.

According to CB Insights, in Q2 2021 alone 136 companies became unicorns, having received $1B in investments. And in Q3, venture capital firms around the world invested $156B — an impressive amount compared to $60.7B in Q2 2020. It seems that this trend is not going to slow down. 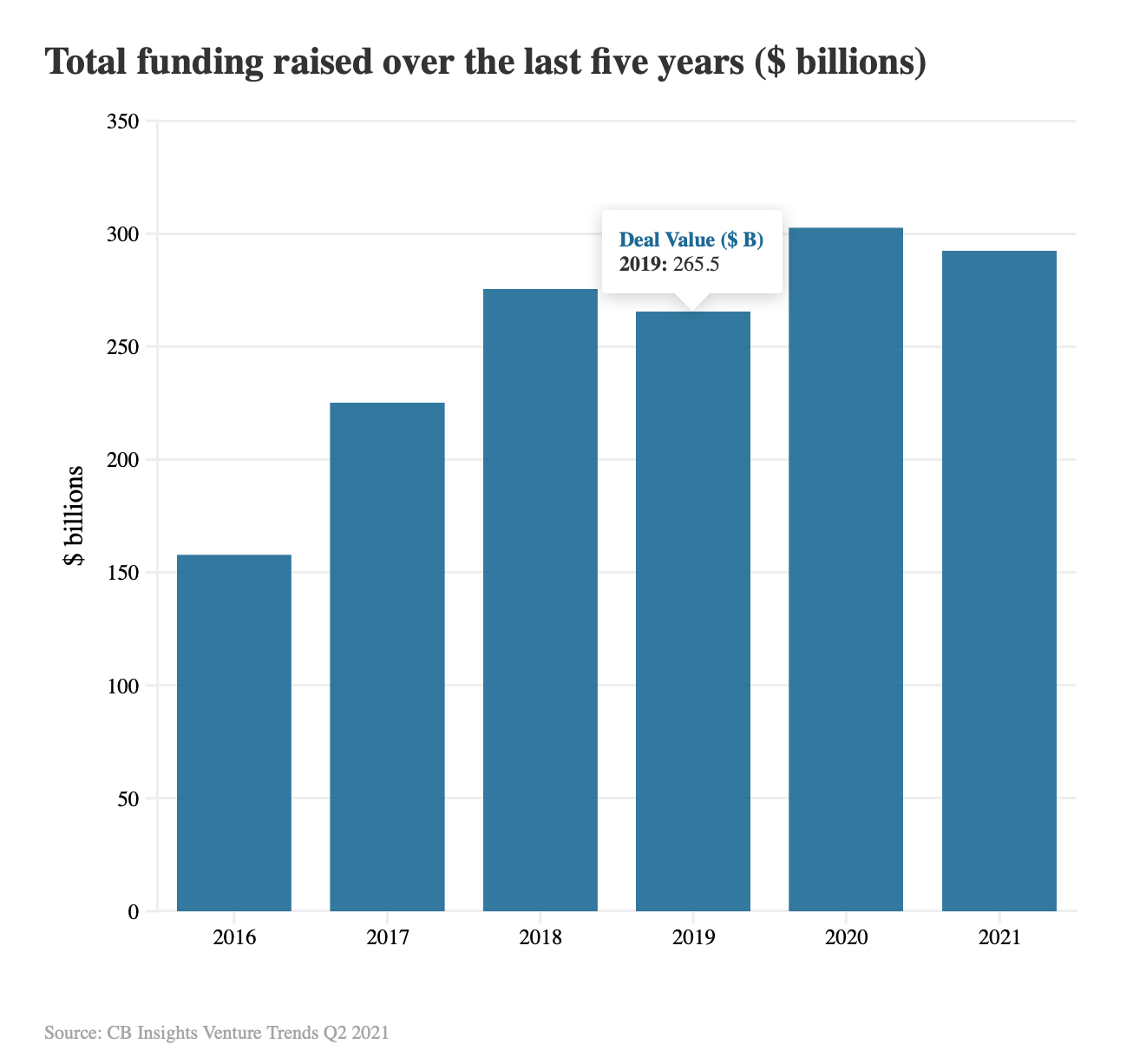 Hence the enduring debate. Some note that the NASDAQ index has already started to decline (−7% at the beginning of this year). Others argue that, unlike the unprofitable companies of the early 2000s, promising young startups are very successful in the market and bring real money.

So will the startup bubble burst once again? Instead of blindly relying on others’ opinions, we’ll try and figure it out on our own.

Let’s take two extreme scenarios: the sprawling ecosystem of IT startups will either explode or continue to develop successfully.

Future 1: Last minutes till another crash of NASDAQ

“This feels a lot like 1999 to me,” Hussein Kanji, a partner at London-based venture capital firm Hoxton Ventures, said in an interview with CNBC. “There was so much enthusiasm for catching the next big thing.”

Hussein Kanji is not the only one who believes it. The billionaire investor Stanley Druckenmiller thinks the situation on the investment market resembles some raging mania. “Everybody loves a party ... but, inevitably, after a big party there’s a hangover,” the CEO of the Duquesne Family Office told CNBC.

Many experts agree that the IT sector market is now at its most fertile point. But the economy has a cyclical nature, so there’s an inevitable recession after each upswing.

Let’s look at what the dot-com bubble of the early 2000s has in common with today's explosive growth of startups.

Since COVID-19 hit the world, the IT sector has skyrocketed like never before. Venture capital funds and angel investors have been pouring money into new startups at unprecedented rates. Entrepreneurs could not help but notice this trend, so they obviously took advantage of it. As a result, there is a rapidly growing number of young startups that have no confirmed income.

In 2021, investors are paying attention not so much to the company’s potential as to its plans and ambitions. They pour money into an emerging company without fully grasping its concept. The times of thorough reviews and analyses are gone — now, decisions can be made after a 30-minute call with founders, only based on check size and current trends.

It even happens when not millions, but billions of dollars are at stake. Remember how Nikola Motors’ market value skyrocketed and then collapsed in 2020–2021? It’s a striking example that suggests a possible bubble burst. Investors are buying shares in companies with inflated values. It’s hard to miss their euphoria of new technologies that promise a great future. But such an emotional approach is destructive to the stock exchange.

The Bank of America noticed another alarming signal just six months ago: despite the obvious loss in profit over the past three quarters, the market value of the S&P 500 keeps growing. Data by FactSet show that the index was trading with a forward P / E ratio of 21.8 — a number well above the 5-year average (17.6) and the 10-year average (15.8). It was caused by a price jump in the market.

Finally, we cannot ignore the obvious red flag in the market. In Q4 2020, the record number of companies exceeded profit expectations by more than 10%. According to the Bank of America's head of US Equity & Quantitative Strategy Savita Subramanian, we’ve already seen it happening at the peak of a 2000’s tech bubble.

The potential bubble of 2021 is made of better quality material and may take longer to burst. It’s exactly what the investors need to protect their assets.

Nevertheless, the fact that it looks stable (more or less) does not mean it won’t burst at all. “All of the elements of a bubble environment remain in place,” the strategist Chris Senyek of Wolfe Research explained in his study. And that bubble, he argued, was most inflated in the Nasdaq 100 whose biggest components include Apple, Amazon, Microsoft, Facebook, Netflix, and Tesla.

Alan Patrick, the co-founder of the analytical company DataSwarm, shares his opinion. He says that, indeed, there is a bubble, but it has no plans of bursting yet. It makes the market situation yet more and more comical. Although the companies’ share prices are growing at lightning speed, at the moment we are the ones inflating the bubble.

Some other analysts and investors share the sentiment. Overall, their verdict boils down to one thing: the bubble exists and will burst. It’s just not clear when exactly.

Future 2: Bubbles are similar, but not identical

The more optimistic exchange market players stand their ground, believing that the situations are similar, but the discrepancies make all the difference in the world.

Differences between the two bubbles

The most important difference between the bubbles of 2000 and 2021 is the size of the companies whose shares are on top of all charts.

The dot-com bubble formed because the market value of startups did not match their incomes. Pure and simple, all of this was just hype.

In 2021, the largest players in the market are Apple, Amazon, Google, Facebook, etc. The collapse of those tech giants, although possible, is less likely than the collapse of Pets.com from the 2000s. 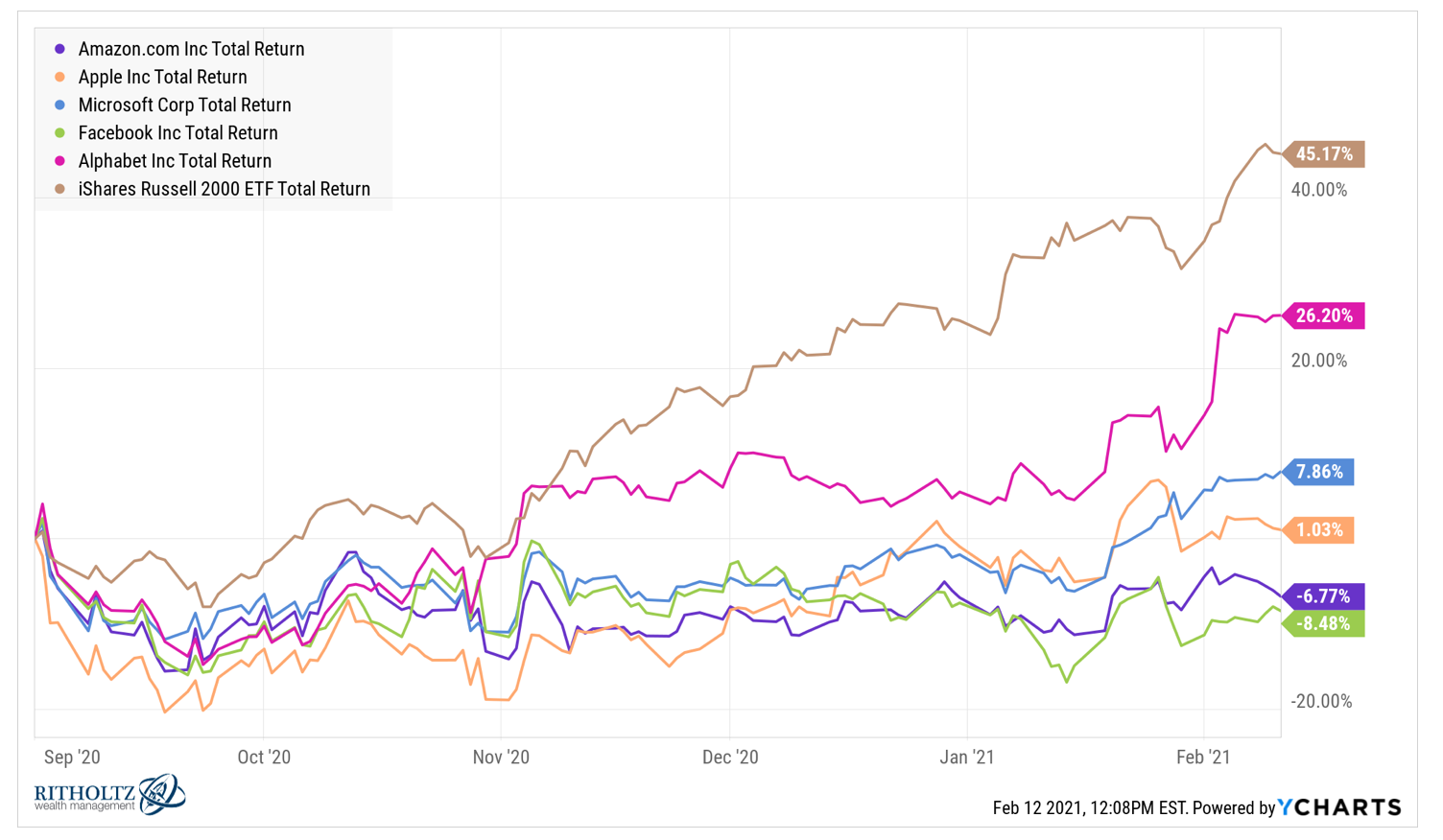 Even when the US economy was going through hard times, technology and software remained a reliable and stable sector that never stopped growing. The public demand for the products of tech giants is too great to show any decrease.

In the late 90s, people could only hope that the company of their choice became the new leader of the Internet revolution. But now, investors have not only real indicators of startup income and success but also the opportunity to analyze the market. It’s much easier to make accurate projections now than 20 years ago when 99% of companies were operating at a loss.

DataTrek Research co-founder Nick Colas insists that there is another key difference between 1999 and 2020 that affects the situation dramatically: the US Federal Reserve System. The Federal Reserve recently confirmed $120B asset purchases made to boost market liquidity. There’s a zero interest rate policy, and it’s supposed to remain so until at least 2023.

You couldn’t say that about the bubble of the late ‘90s. By March 2020, interest rates had risen to 5.85%, which had been approximately the same as during their previous cyclical peak of 1995.

In 2020–2021, the cost of technology has risen incomparably with what we had in the 2000s. Today, most market-stimulating companies are extremely profitable and have actual evidence of their income.

The NASDAQ index has nearly tripled in the past five years. The market value of several large-cap tech companies (including Amazon, Google, and Facebook) has surpassed the $1 trillion mark. Microsoft and Apple are now worth over $2 trillion.

In the 2000s, people were ready to blindly invest in the future. But today’s companies are very different from those that operated 20 years ago. Now, we invest in statistics and showings.

Of course, kickbacks happen. It’s hard to forget GameStop and SPACS, but we’ve forgotten that it’s natural for the market: 60% growth, 20% pullbacks. This is a healthy market’s natural rebalancing when stocks jump too high or 1–2 top companies get overvalued.

Tesla is a good example of it. As a car producer, its value is probably inflated. But if you see it as a corporation working on a huge number of technological innovations (from AI autopilot to batteries), the situation stops looking so dire.

Conclusion: to burst or not to burst

It’s crucial to note another detail about the dot-com bubble that is often overlooked. The bubble burst of the 2000s did not affect all industries in the same way.

It brings the general trend to light: in difficult markets, some areas somehow become more profitable than others. Then the balance wheel turns and new players enter the arena, including those who offer truly innovative solutions that can change the world.

Markets and economics are changing constantly. For example, now we see a trend of shifting away from emerging large-cap enterprises and tech companies. They are being replaced by small-caps, value stocks, and foreign stocks.

There is no definite answer to that, but the current situation looks much better than it was before the explosion of March 10, 2000.

Analytics and inner products of the Admitad Projects startup studio