Equity Dilution for Startups: The Idea, Scheme, and Consequences

How does share dilution happen in startups? When do you need to deal with it and how should you do it? Let’s see some examples and do the math

The term share dilution can often be scary for first-time founders. You can’t grow a successful startup without investments but with each new funding round, the founder’s ownership decreases. As long as the company attracts investors and raises funds, the dilution process is inevitable.

However, a dilution should not be considered as a transactional event with only negative consequences. It is better to own a smaller share in a large and prosperous startup than a bigger one in a low-income business.

Dilution is the decrease in the existing shareholders’ ownership against the total number of securities. By attracting funds to a startup, the founders launch this process, thus cutting the shares more and more with each new round of financing. Plus, the more cofounders there are, the more prominent the dilution gets.

It may seem that the founders are likely to experience negative fallout from that. But that’s not true. The decreased value of shares is painful when the business development is insignificant or absent. If a startup and its value grow, even the diluted share will still cost a solid amount.

Thereby, rational dilution cuts down the share but does not reduce the total cost of the block of shares. You need to increase the value of a startup so that although you have smaller ownership, it’s part of a larger business.

To understand the complicated process of dilution, it is important to learn more about the concepts of startup shares, stock, and how they relate to each other. A stock share is a single unit of ownership in a company; its amount influences the ownership of each entrepreneur. Securities are issued and reissued when founders decide so. They can be sold to private and legal entities.

Stock always has some value. At the initial stage of a startup, it is nominal (for example, $0.00001 per piece). The company valuation is calculated by multiplying the number of shares by their cost. Successful startups are characterized by the rapid growth of their stock prices. By purchase, a person acquires some part of the company. Its cost is calculated by multiplying a share price by the quantity purchased.

Common shares allow you to vote at the shareholders’ meeting, make decisions about the startup activities. Preferred shares are usually not involved in management, but they have an advantage over common securities in paying dividends and profit, making claims on assets in case of bankruptcy.

The fact of owning the shares is confirmed by certificates, mainly in digital form. At an early stage, it’s usually enough for a startup to just sign contracts on the purchase of securities.

The extent to which the founders lose part of their business ownership depends on many factors, including the number of partners and funding rounds, investor requirements, and so on. Investments in a startup are regulated by a Term Sheet, i.e. a document containing the terms of the transaction, lending, or project development.

Term Sheet can also affect dilution. For example, many startups cannot fulfill their potential due to high ownership percentages granted to early-stage investors. Therefore, when entering into contractual agreements, it’s highly recommended for the founders to seek legal advice.

After developing a startup and raising investment rounds, the founder might exit having, say, 20% of the business instead of the initial 100%. At the same time, a 20% stake in a company is truly significant if the company is valued at $500+ million.

Let’s delve deeper into the dilution process and learn how it happens, what its influences are, and what consequences it may have.

Let’s suppose that a startup was founded by 2 people, whose shares in the company are mutually agreed to be 40% and 60%.

The founders attract an angel investor to finance the project. Thus, they receive $600,000 for 25%. The founders’ ownership goes down by 25%, becoming 30% and 45% correspondingly. 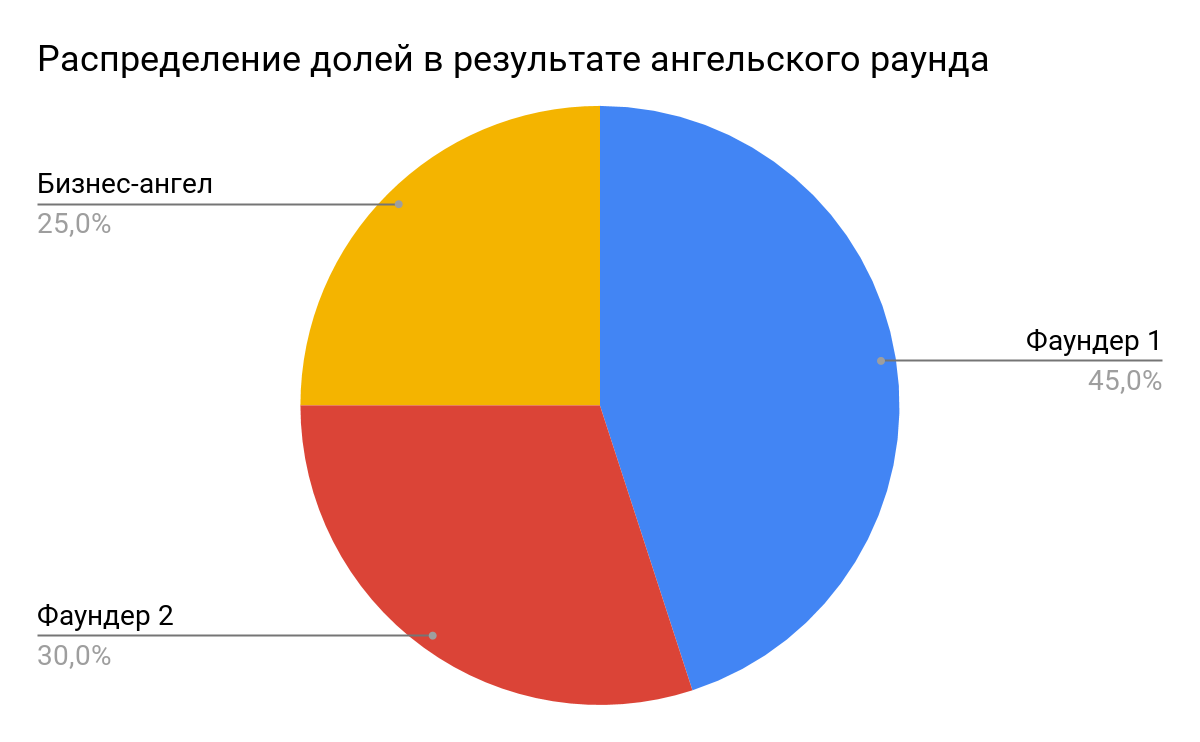 At the next stage, the company attracts a venture investor who puts in $1.2 million for 30% and requests allocating options for employees amounting to 3% of the shares. Then all existing shares will be reduced by 33%: 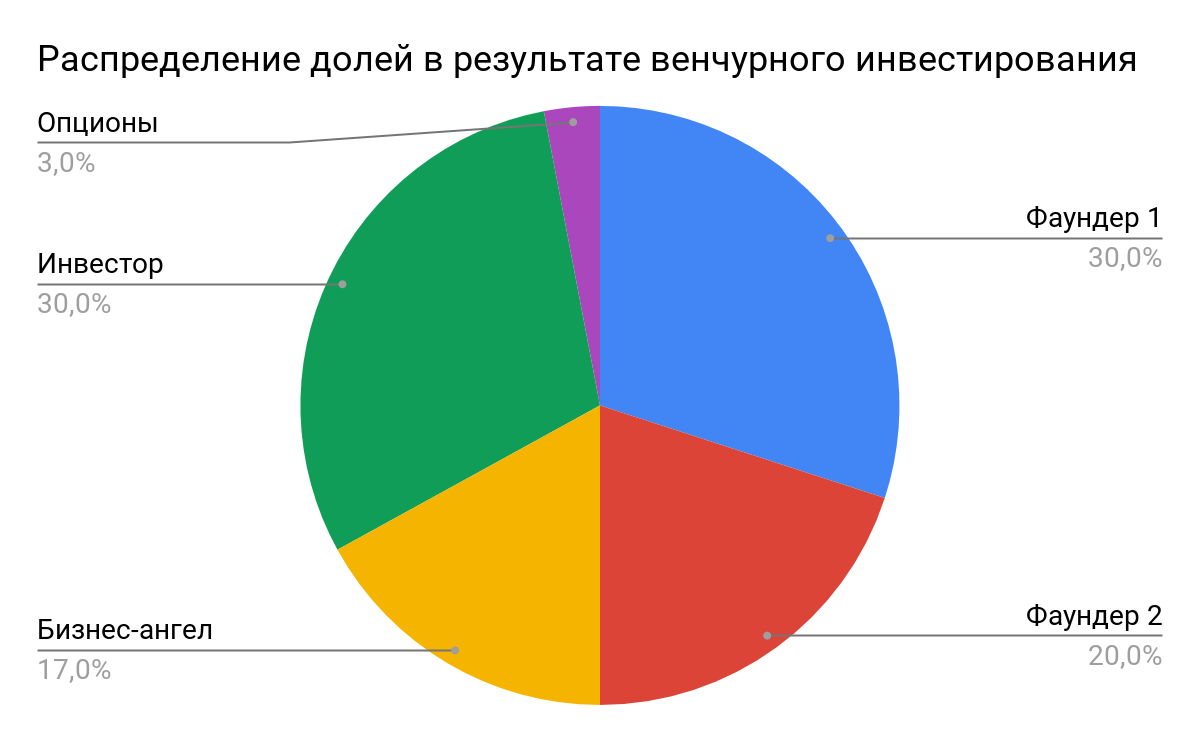 The dilution will go on and on while the company raises new rounds of financing. As a result, the investor who enters the last wins the largest ownership of shares. That’s why founders should be smart about attracting third-party funds. If the company can survive on its own and doesn’t need external financing asap, it is more profitable to use its resources and save part of the business.

The dilution in the capitalization table

Let’s consider a basic example of share dilution and its accounting in the Cap Table. Say, a company has 2 founders, Ivanov and Smirnov. The ownership shares are distributed 60% and 40%, correspondingly. The startup issued 1000 shares after launching.

Table 1. The cap table for a company

Table 2. The cap table after receiving money from the investor

Table 3. The cap table after receiving investments from the VC fund

The capitalization table shows dilution. So, the shares of Ivanov and Smirnov went down from the initial 60% and 40% to 40.5% and 27% respectively. After the second round, investor’s shares decreased from 17% to 13.5%. However, in this case, the dilution is rational: in contrast to the decrease in the ownership percentage, its value has grown. The cost of Ivanov’s and Smirnov’s blocks of shares increased from $300,000 and $200,000 to $1.5 million and $1 million, correspondingly. This indicates the startup's success and rapid growth.

With the funds raised, our company is actively developing its promotion channels. Within six months, the organization’s revenue increased by 5. As a result, the startup was noticed by a corporation that offered a buyout for $35 million.

Table 4. The cap table after selling the startup to the corporation.

The above example of dilution is perfect for the participants. This scenario allows for startup founders Ivanov and Smirnov to form the first capital. It also provides a quick exit and good indicators. For the investor, this is a x47 increase in the amounts invested after only a year of work. For the VC fund, the investments increased x9 times in six months.

However, in real life, this scenario is often complicated.

These and other similar conditions take away the founder’s part of their share and potential profit. Sometimes during the acquisition transactions for millions of dollars, the founders get nothing but valuable experience.

Employee stock ownership plans (ESOPs) are also quite common in startups. They might be used as a motivation tool when funding is limited. They provide employees with the right to purchase shares of the company at a fixed price under certain circumstances. It means that the option acts as a facilitator directly affecting the dilution. The following terms of the option must be specified:

From 10 to 20% of startup shares are usually allocated for employee options. The company issues and reserves a set number of shares.

In the capitalization table, the ESOP should be displayed in a separate row, even if the securities have not yet been distributed. During the financing rounds, the ESOP is also diluted, but in some cases, the company initiates a pre-issue of shares to preserve the ownership of employees.

Using our previous example, let’s assume that our company raised two rounds of financing and decided to allocate 12% for employee options.

Table 5. The cap table after allocating 12% for an employee option

As a result, the shares of participants decreased, as well as the value of the stake. The company decided to distribute the shares among its best employees Petrov and Belova based on a 1-year cliff and 4-year vesting. At the end of the year, the employees decided to exercise their options. Since the 4-year period is not over yet, they can only claim 25%.

Table 6. The cap table after the distribution of shares between two employees

According to the previous scenario, a corporation offered a buyout for $35 million. However, not all of the shares were distributed, since the vesting process was not completed. In this case, the problem can be solved by accelerating the vesting process. That means that both employees (Petrov and Belova) can claim full shares (6% each).

Table 7. The cap table with options after selling a startup

As you can see, the share dilution of the founders’ and investors’ stock reduced the exit profit due to employees’ options, as compared to Table 4. However, since ESOP got employees motivated, it could also become the reason for the startup’s rapid growth and success.

Divide and conquer: Is it necessary to fight against dilution?

Initially, the correct distribution and management of shares significantly reduce the risk of business loss. For example, the more founders a startup has, the more prominent the dilution will be. Therefore, it is necessary to form a team of founders with clear roles and degrees of participation.

When discussing the terms of investments, it is crucial to carefully study the term sheet. This document affects the company's further activities, structure, and shared ownership. It can even cause significant losses.

The examples in our blog show that financing a startup should be considered as an increase in its value instead of shares dilution. Even though the founders Ivanov and Smelov lost some ownership as a result of two funding rounds and employees’ options, the overall company valuation has significantly increased. Therefore, each shareholder received their share of new cash which was not part of the startup’s value before the financing.

The worst-case scenario of share dilution threatens companies that spend money faster than they grow. In this case, a startup would constantly need new funding to cover its needs. This dilution is caused by wasting funds instead of investment terms. That’s why founders should carefully consider if new funding rounds are justified at the current stage of the company’s growth.

The rationality of the share dilution directly depends on the dynamics of the capital waste in comparison with its growth. If the value is increasing faster than expenses, this indicates that the startup works efficiently and the participants do not need to worry about the dilution of shares.

To sum it up

Even at the stage of building a startup, it is important to rationally distribute the equity. In most cases, the main reason for inadequate shares dilution is the number of founders. It is more profitable to create a startup alone if possible and attract cofounders for smaller shares later.

So that the company works effectively, it’s strongly discouraged for its participants (founders, employees, investors) to treat new financing rounds as a transactional dilution of shares. It is important to understand that careful investing leads to an increased value of a startup (except for the situations when it entails excessive costs).

Founders should always keep in touch with the costs and the rate of capital expenditure. In startups, rapid spending of funds is acceptable if every dollar invested brings back an increase in value.