New Unicorn Startups of 2021: An Overview and Points of Growth

Companies that became Unicorns in 2021, listed by CB Insights & distributed by industries, countries, and cities. Comparative analysis with previous year’s results. Review of the 10 best unicorns of 2021. New startups with a valuation of at least $10 billion

Last year, Crunchbase experts recorded the unprecedented pace of funding. Previously, global capitalization volumes did not exceed $100 billion per quarter, but each completed quarter of 2021 exceeded the record of the previous one:

We found that 2021 was also a record year for unicorn startups. Below, you will find an analysis of the list of unicorns by CB Insights. We calculated how many billionaire startups joined the ranking in 2021, which industries had the most new unicorns, and which countries appear in the list most often.

As of December 10, 480 billion-dollar startups joined the CB Insights list in the last year. In total, there are now 936 companies in the rating. It means that in 2021 alone, the list has doubled: newborn unicorns account for 51.28% of the total number.

Note. There are other lists of unicorn startups, such as from Crunchbase, which lists 1,105 companies at the time of writing. We chose to refer to CB Insights since we are interested in the new unicorns of 2021 and the rating has the date of addition, which is convenient for sorting data.

Past results by year:

Here is a table for visual consideration:

It is worth mentioning that at the time of writing, the calendar year has not yet ended. During December, new startups will be added, and the indicators will change, slightly increasing the percentage.

So far, in the ten days of December, CB Insights has added 13 new unicorns to the list. In comparison, the lowest monthly figures in 2021 are in February, when 21 unicorns were added. In 2020, the number of December startups reached 18.

Let’s take a look at how startups are distributed by professional fields and industries. Among the 480 startups that have been added to the CB Insights list in 2021, half are FinTech (131 companies) and SaaS (109 companies). Startups are rapidly developing in the industries of E-commerce (42), medicine (36), and artificial intelligence (33).

Compare this with the top 5 industries from 2020:

Below, you will find last year’s general statistics of the distribution of unicorns by professional areas:

The three countries with the highest number of new startups on the unicorn list are the US, China, and India. Moreover, in the ranking from CB Insights, American startups make up almost 60% of the total number of unicorns added in 2021. You can say that among every 5 startups that became unicorns, 3 were of American origin.

The overall top 10 countries with the largest number of billionaire startups added in 2021 looks like this:

Let’s also take a quick look at the distribution by city. In 2021, San Francisco was the most unicorn-friendly city, with 78 added startups registered there. New York is in the second position: here, 57 projects have grown to the value of $1 billion.

In Europe, over the past year, the largest number of unicorns graduated from the renowned centers of the venture industry — London (15) and Berlin (12). In India, Bangalore (16); in China, Shanghai (14).

Let’s take a look at the ten most expensively priced unicorns of 2021 that remain in private ownership.

FTX is a centralized cryptocurrency exchange specializing in derivatives and leveraged products. It supports all major cryptocurrencies. The company is registered in the Bahamas and was established in 2018. Startup founder Sam Bankman-Fried is an MIT alumnus who previously worked at Jane Street Capital as an international fund trader.

FTX offers a range of innovative trading solutions: derivatives, options, leveraged tokens, and cash markets for 100+ trading pairs, including BTC/USDT, ETH/USDT, XRP/USDT, and its own token FTT/USDT. Convenient desktop and mobile apps are available both for beginners and experienced users.

J&T Express is an express delivery company that uses automatic sorting warehouses and other innovative solutions. The founders of the startup are former Oppo directors Jet Lee and Tony Chen.

In 2018 and 2019, J&T Express won the Best Brand of Indonesia award. It offers a range of solutions for E-commerce businesses, such as last-mile delivery, sales channel management, and international logistics.

After launching in Indonesia in 2015, J&T Express expanded to Malaysia and Vietnam in 2017, the Philippines and Thailand in 2018, Singapore and Cambodia in 2019, and China. The Indonesian branch showed rapid growth and became the eighth unicorn in the country.

GoodLeap (formerly Loanpal) is a trading platform founded in California in 2003 that provides financing solutions for the transition to home solar energy. In 2020, it accounted for 41% of the US solar loan market.

The company offers financial services for home renovations, including mortgages and loans. More than 125,000 clients in 50 American states have received more than $27 billion from GoodLeap for home improvements.

Also since 2018, the company’s operations have resulted in more than $6.5 billion of capital being invested in the development of sustainable solutions for homes. Today, GoodLeap’s patented technology platform brings together more than 13,000 merchants.

Founded in 2013, ZongMu Technology is a tech, service, and product provider of autonomous driving and driver assistance systems. The company produces gadgets for the 2D and 3D panoramic views as well as devices for autonomous parking and driving recording.

The startup is headquartered in the Shanghai Zhangjiang International Science and Technology Innovation Center. The production units are located in Xiamen and Huzhou, and the R&D centers are located in Shanghai, Beijing, Xiamen, Shenzhen, Chongqing, and overseas in the city of Stuttgart.

Chinese startup Weilong Foods was founded in 2001 in Luohe. The company is engaged in the development, production, sale, and marketing of spicy snacks. Noodles from Weilong Foods are especially popular with Chinese children.

Today, Weilong Foods operates four industrial parks and many subsidiaries throughout China. According to the website of the Hong Kong Stock Exchange, in May 2020, the company began formally preparing for a public offering.

Earlier in 2020, it completed its only strategic funding round of ¥3.56 billion (about $560 million). Investors included CPE and Hillhouse Capital, as well as Tencent Investment, Yunfeng Fund, Sequoia Capital, and other firms. The post-investment valuation of Weilong Foods reached ¥70 billion (about $10.9 million).

Digital Currency Group (DCG) is an American venture company specializing in the digital currency market, founded in 2015. It builds and supports crypto and blockchain companies using analytics, networking, and access to capital.

DCG is an active seed-stage investor. During the existence of the company, more than 150 investments have been made in 30+ countries. The headquarters is located in New York, but by the end of 2021, management announced its relocation to Stamford, Connecticut.

The founder is Barry Silbert, former CEO of SecondMarket, Inc. He has been investing in blockchain technology companies since 2013. Shortly after the SecondMarket sale, Silbert formed the Digital Currency Group, with Genesis and Grayscale as its first subsidiaries.

Lacework is a data-driven cybersecurity platform for cloud solutions. It automates the process of collecting and analyzing huge amounts of data passing through the client’s cloud platform. Tools offered include data storage service Snowflake, social networking app Nextdoor, and personal finance management NerdWallet. All of them provide cloud security and protect workflows.

The company was founded in 2015. Founder and CTO Vikram Kapoor is a former head of the development team at the Bromium startup. Lacework is headquartered in California with offices around the world. The startup has received funding from Sutter Hill Ventures, Altimeter Capital, Liberty Global Ventures, and Snowflake Ventures.

Previously, the company operated behind closed doors, but in June 2019 it came out of the shadows. Since then, Fireblocks has opened offices in the UK, Israel, Hong Kong, Singapore, France, Germany, Austria, and Switzerland.

Caris Life Sciences is a startup in the field of molecular biology and artificial intelligence. Its molecular profiling services evaluate a patient’s DNA, RNA, and proteins to help physicians and cancer patients make better treatment decisions.

Caris Life Sciences is headquartered in Irving, Texas, and has offices in Phoenix, Denver, New York, and Basel, Switzerland. Today, the firm’s services are available in the US, Europe, Asia, and other international markets.

The most unusual startup in our selection, Canadian Dapper Labs, creates blockchain-based NFT games. It developed the popular basketball app NBA Top Shot, which has already attracted more than a million users (including Michael Jordan himself!)

CEO and founder of the company Roham Gharegozlou explains that as the Internet develops, the demand for digital collectibles is growing with it. The idea to start a business selling NFTs was put into action back in November 2017, when Dapper Labs launched its first product, the CryptoKitties app. The trading of digital tokens has become the second option for using blockchain (with bitcoins being the first option).

Today, startup Dapper Labs is one of the top 10 most innovative gaming companies. It is currently planning to launch a collectible NFT application about football.

Decacorn is a privately owned company with a valuation of over $10 billion. The authorship of the term belongs to the Bloomberg agency, which began using it in 2015.

2021 was a record year for venture capital funding around the world, so the growth is not surprising. It was the year that Crunchbase’s unicorn list crossed the 1,000 startup mark for the first time. The funding pace for the fast-growing companies was record-breaking.

Only 14 years have passed since the appearance of the first decacorn. Facebook (now Meta) was valued at $15 billion in 2007, helped by strategic investments from Microsoft.

In 2021, the $40 billion design platform Canva appeared among the newly-minted decacorns, placing it on the 6th position in the Crunchbase ranking (the top three are consistently held by ByteDance, Ant Group, and SpaceX). The company was valued at $14.4 billion since its previous funding round in April of this year, and Crunchbase experts estimated it was adding $157 million in value per day.

The 8th place in the ranking was taken by Databricks, a company specializing in data processing and artificial intelligence. In August 2021, its valuation was $38 billion. Six months earlier, after a round of investments in February 2021, the company was valued at $28 billion.

The 10th highest ranked company on Crunchbase is London-based neobank Revolut, valued at $33 billion. Back in July 2020, its valuation was $5.5 billion. For 12 months, the startup has risen in price by an average of $77 million daily.

Among the top 20 most expensive decacorns in the world, two companies became unicorns in 2021: the $25 billion crypto exchange platform FTX and the $20 billion logistics company J&T Express. We mentioned them both in our list of top 10 new unicorns of 2021.

There were 12 decacorn exits in 2021. Among them, 3 companies (Rivian, Roblox, and Squarespace) reached a $10 billion valuation in the same year. As of November 18, 2021, the last exited decacorn was Paytm.

Since the Facebook IPO in 2012, only 31 decacorn startups have gone public. Most trade with market capitalizations that exceed even the most optimistic private estimates. 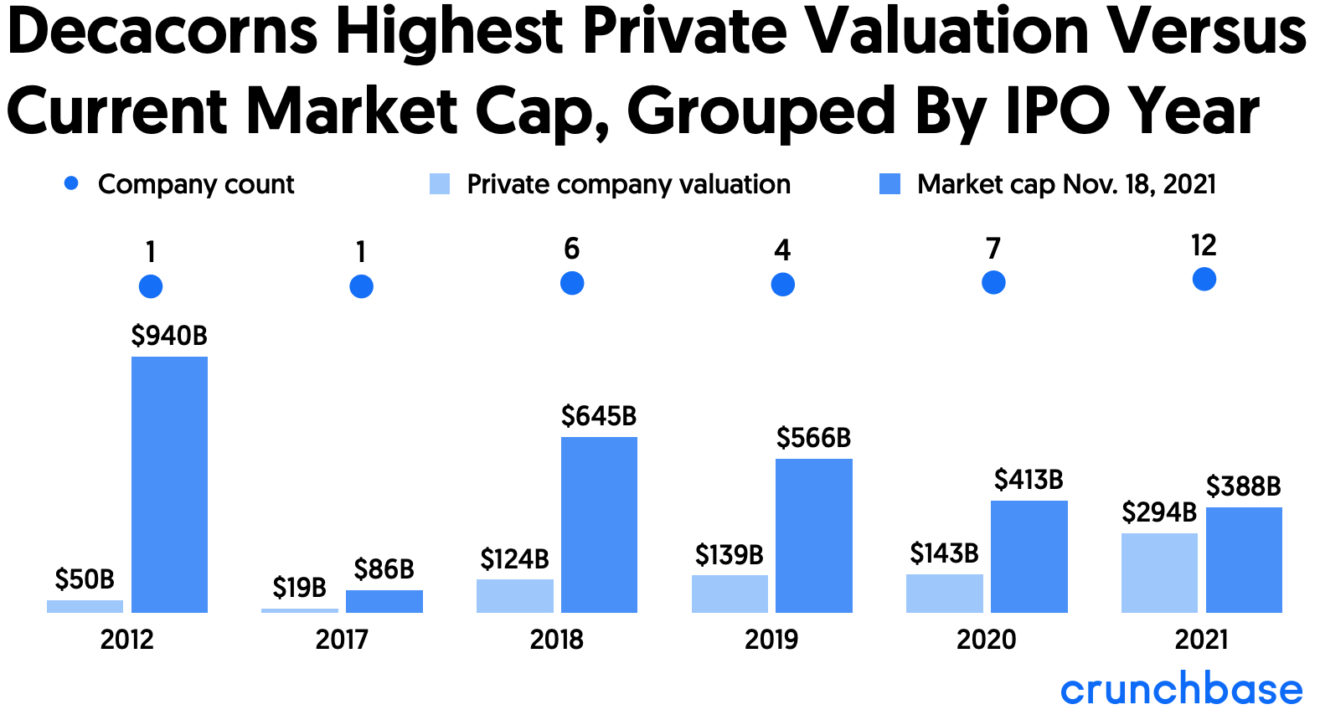 According to CB Insights, as of December 10, 480 new unicorn startups have appeared in 2021, doubling the total list of unicorns. By comparison, there were only 110 new unicorns in 2020.

The five most popular areas for the newest billionaire startups:

Geographically, about 60% of new unicorns come from the United States. Apart from American startups, Chinese and Indian unicorns were the next most often added to the CB Insights list. Top 3 unicorn countries in 2021:

In most cases, startups with a billion-dollar valuation were located in San Francisco, with 78 newly-added projects registered there.

Analytics and inner products of the Admitad Projects startup studio