What is an MVP and Why Your Startup Needs One

What is a Minimum Viable Product and why should any business start with that? Let’s dive deep and discover different MVP types, examples, and use cases.

Back in 2005, YouTube was created as a video-dating website. And Instagram was initially called Burbn (as in an alcoholic drink, yes). It was meant to be a planner that allowed users to check in at some places they were hanging out with friends, upload photos from their meetings, and earn points.

Neither of the ideas, however, panned out. Therefore, both companies conducted a performance analysis, paid attention to the users’ feedback, and finally pivoted. Essentially, the video-dating app and Burbn were acting as companies’ minimum viable products, or MVPs.

What is a Minimum Viable Product?

The term Minimum Viable Product was first introduced by Eric Rees, the famous American entrepreneur and the inventor of the Lean Startup. MVP is the basic version of the product that is just enough for testing.

In short, the concept of MVP illustrates the idea “Dream big, start small”. It is based on incremental software development that is being tested in real user conditions with every iteration. In that case, feedback helps the company mitigate risks at an early stage, avoid mistakes, and make sure there’s a market demand in advance.

Here are the traits of a top-notch MVP:

Every stage of development should take the product to the next level. Then, the customers step in to test the product and share their feedback on any possible improvements. Thereby, MVP is instrumental in testing new hypotheses and eliminating poor decisions that could destroy the whole business.

The quest for good ideas is not a linear process. Conversely, it consists of several looped iterations that sometimes can lead to the next level. In total, there are six steps:

Every step can turn out to be a loop. You should go through every stage, again and again, sometimes taking a couple of steps back if the hypothesis doesn’t work. And if the original idea proved its inconsistency during testing or feedback stages, it’s high time for a company to pivot.

Discover the thirteen types of MVP

The purpose of the MVP is to test the future product on a live audience. Therefore, the quality and accuracy of test results can impact the speed and efficiency of the development. That’s why the types of Minimum Viable Product are divided into two groups: low-fidelity and high-fidelity. They can be merged and used simultaneously.

As its name suggests, the next group is characterized by low fidelity and simplified methods of gathering intel. They do not require careful engineering and large financial investments, so they lead to less accurate results. Their main purposes are:

Types of MVP with low-fidelity:

The skateboard version of the product

A few years ago, an Agile and Lean coach Henrik Kniberg published a book on the methods of product development. An illustration from this book has been published dozens of times. It describes the basic principles of Minimum Viable Product: 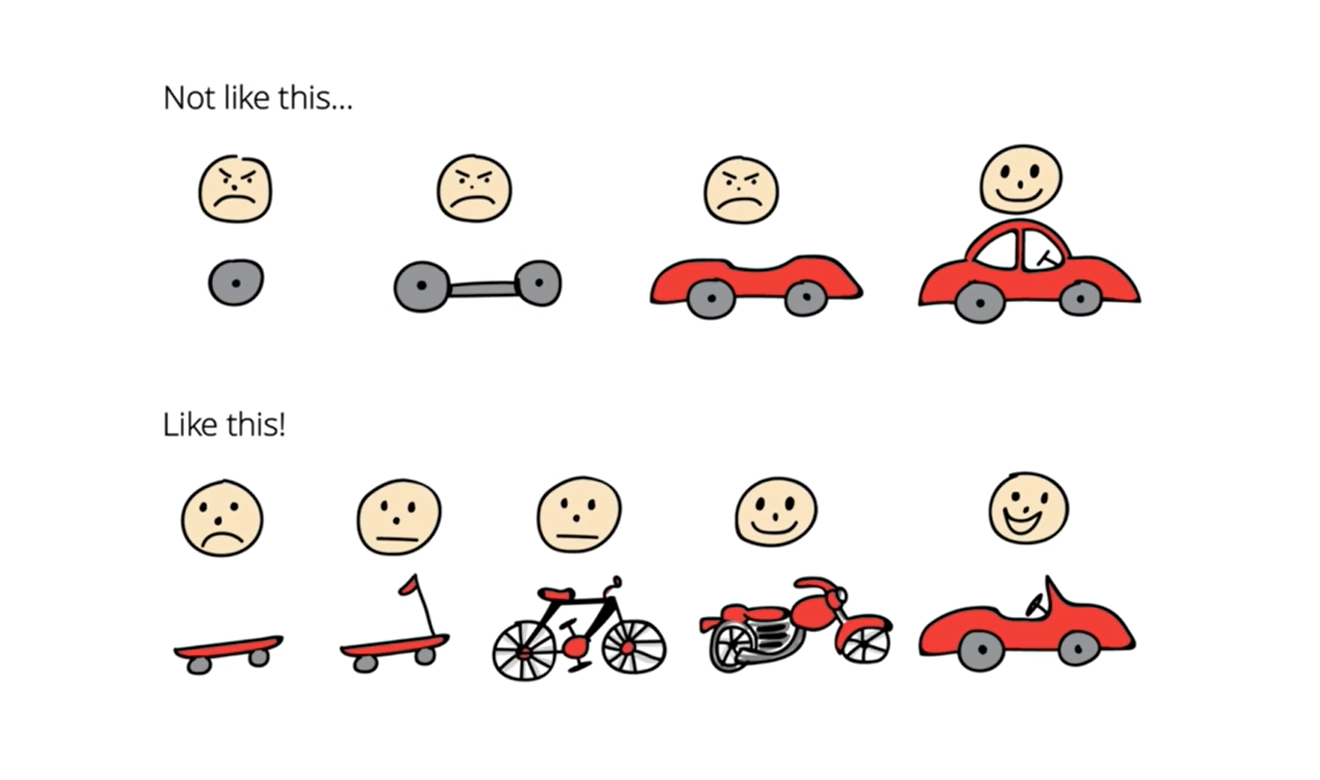 The upper half of the illustration shows an incorrect and ineffective way of creating a product. The principle is as follows: the client expresses the need for a vehicle that will help them move comfortably and quickly over long distances. We’re highlighting the main traits of the product:

The company suggested that the best fit for this request would be a car. The development of prototypes has begun. However, each presented prototype wasn’t usable at all. Until the moment of receiving the final product, the client has never been satisfied with the iterations, because they could not use them and provide any feedback.

In the lower half, the developers are sending the skateboard to the client. This is still far from ideal: it is uncomfortable, slow, and you won’t get too far with it. But it’s working — albeit not ideal — means of transportation. The client can already use it and offer some thoughts.

In this example, the skateboard is the Minimum Viable Product. But of course, it represents whatever you are selling. By the way, because of that picture, many people started calling their first MVP a skateboard version.

How does MVP work?

The gradual evolution of the product that maintains usability helps developers immediately test the hypotheses. If it is uncomfortable to move around on a skateboard, then what about a scooter? If the scooter can’t speed up, will the bike cope with the task? Every next prototype solves one of the customer’s needs and/or increases the efficiency of existing characteristics.

Continuous contact with the consumer gives access to intel about possible bugs and flaws. But when the prototypes are not tested on direct users, the final product inherits the errors of the first stages. Fixing bugs after the sales launch will hit the budget harder compared to the situation when this ideal product was being developed from scratch. In this sense, the Minimum Viable Product method corresponds to the principles of Lean. It detects the simplest and cheapest solutions in the shortest time.

Sometimes, the customer can be satisfied with the product already at the motorcycle stage. That would mean that it makes no sense to develop it up to the car stage. This stage is called the Minimum Loveable Product, i.e. the minimum product that can make the buyer satisfied. The ability to find this milestone will save the startup a lot of resources and time.

But even when the final product becomes the same car that the developers described to the client at the beginning of the journey, the equation develops in favor of all market participants. After all, useful insights were collected and bugs were eliminated in the process. This means that the customer will receive a car of higher quality than originally planned.

Pros and cons of making an MVP

Here is a list of the main advantages of implementing Minimum Viable Product in your business processes:

As for the disadvantages, there are only two of them — and both are significant.

How to make an MVP for your business

Michael Seibel, a CEO of the famous accelerator Y Combinator, identified 4 factors of the perfect MVP:

According to Michael, most startups can start working extremely quickly — just a landing page and a Google spreadsheet are enough. He also explains that an MVP is just a starting point: there should be no magic, no special feature in it. You just need to start somewhere. And the beginning should be as ordinary as possible.

To create an MVP in a short time, Michael suggests the following steps:

The creator of the Lean Startup concept Eric Ries reports: the main task of Minimum Viable Product is to offer the consumer a usable, testable minimum to start a cycle of studying their needs and reactions. However, Eric Ries believes founders usually start with too large projects. They have more features and functions than you need to start. And the larger the project, the more difficult it becomes to understand what exactly consumers did not like.

Eric Ries gives the formula for calculating the perfect MVP. “Take what you think is a good idea and cut its features in half. Then repeat it twice, then ship it back.”

Most likely, customers will perceive the minimum product negatively. In the end, it is 8 times less than what was originally planned. But the main goal is to make sure that consumers experience specific emotions about the product, a specific “like” or “dislike”. In this sense, the worst enemy of the founder is indifference.

At the very beginning of development, its website looked like this (on the left). However, this version was not effective enough, and it is difficult to call it a full-fledged MVP. Therefore, the offer was upgraded with an additional page (on the right): 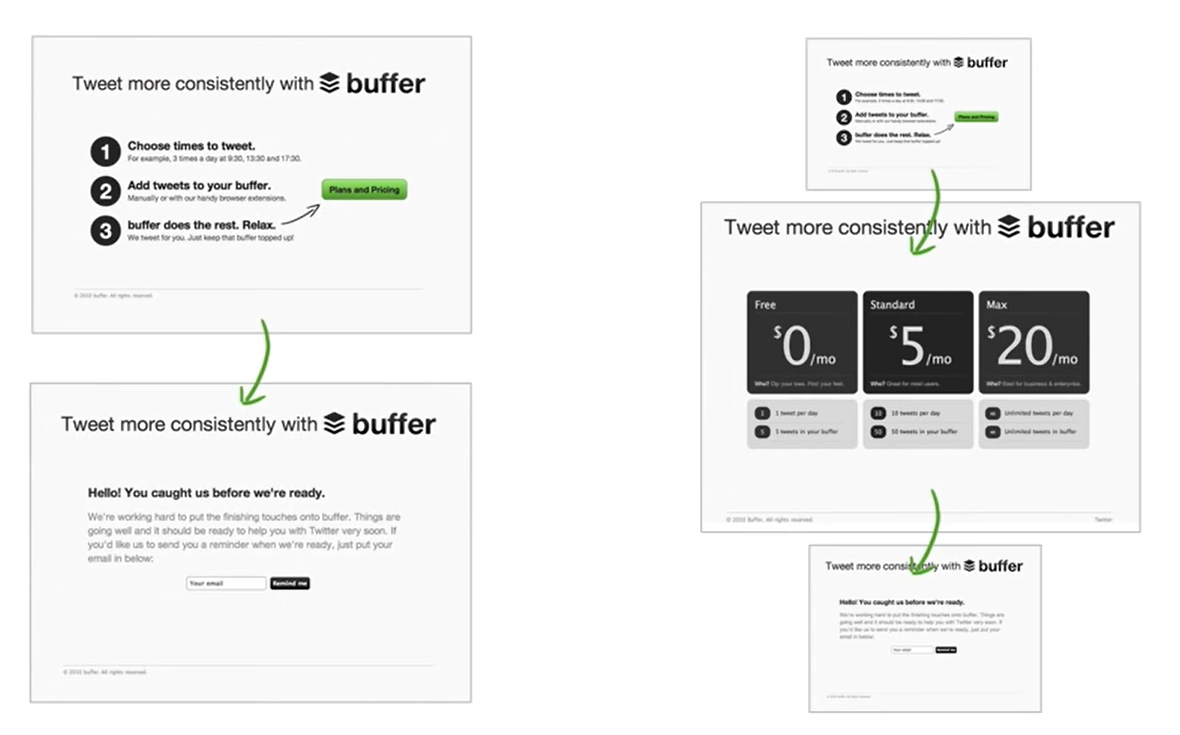 The customer's interest immediately jumped from “Well, this is interesting” to “I want to buy it.” The founder of Buffer Joel Gascoigne stated, “After this result, I didn’t hesitate to start building the first minimal version of the real, functioning product.”

This is what the Minimum Viable Product from Airbnb looked like: 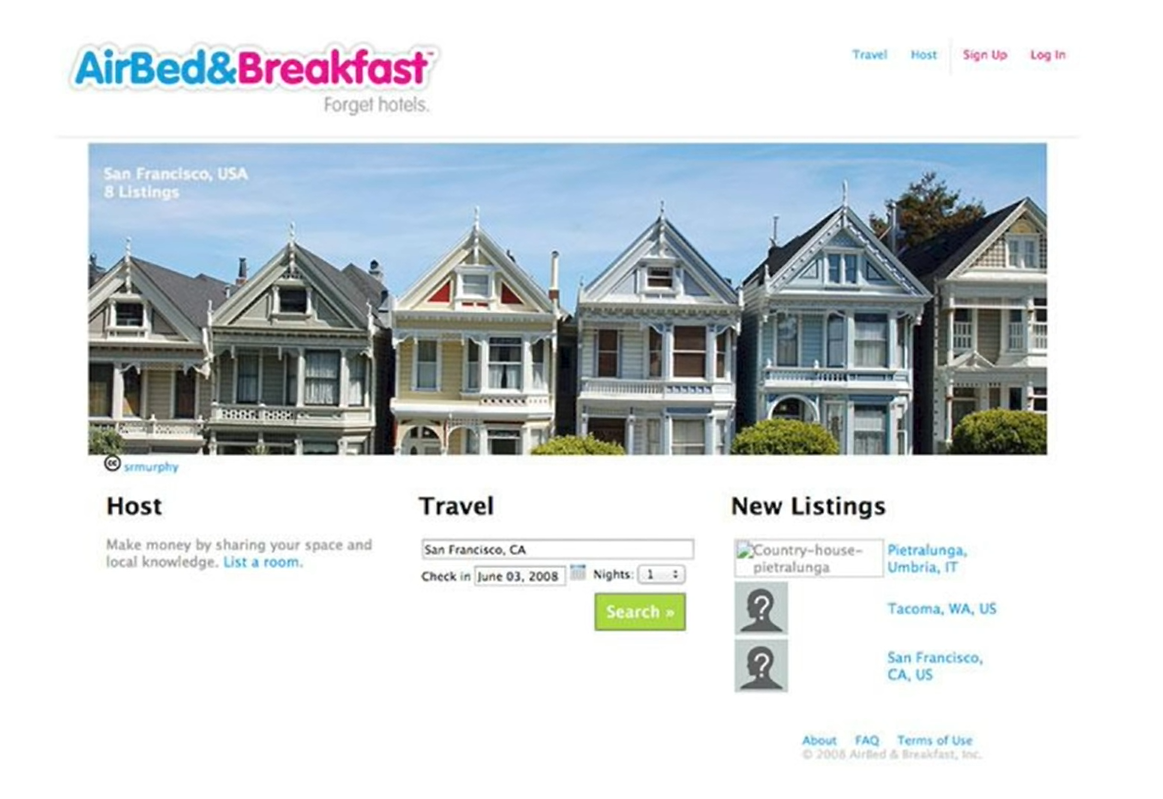 At the very beginning, the service did not have a built-in payment function, and users met directly with the owners of the property and gave them money. Also, there were no built-in maps on the website that would allow you to see the location of rented apartments and houses. Finally, the company’s CTO, who was responsible for the code, worked part-time.

The Twitch streaming service began as a platform for broadcasting the online show Justin TV. At that time, only one channel was available: a live broadcast from Justin’s life. If users didn’t like Justin, they had nothing else to do on this website: all the functionality was limited to one stream. 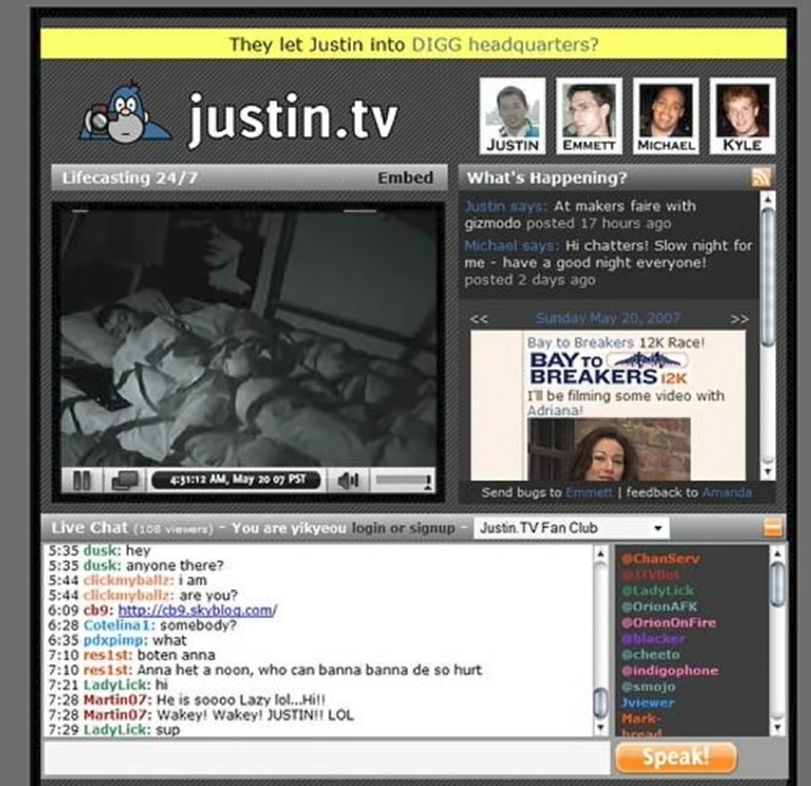 At the same time, the video itself was of extremely low quality — as the founders recall, it was barely possible to recognize the face of the main character on it. And, of course, back then Twitch was extremely far from the gaming and streaming industry.

MVP is a prototype of your product, a demo version that can be tested on real customers. Within each iteration, you receive feedback from your users. This allows you to study the shortcomings of the product and offer an increasingly effective version with each new stage.

The three most important questions that the founder must answer before creating an MVP:

The Minimum Viable Product should be as simplified and primitive as possible. Its main task is to start a cycle of communication with customers, initiate the workflow.