What is Growth Hacking: Top Startup Term of 2021

Growth Hacking is a methodology that encompasses resource-intensive and cost-effective digital marketing tactics focused solely on business growth. The main goals of Growth Hacking are:

Such tactics are most relevant for early-stage startups that need rapid exponential growth while having a tight budget. However, Growth Hacking is widely used in large digital companies as well.

As a term, Growth Hacking was coined in 2010 by Sean Ellis, founder and CEO of GrowthHackers. Since then, the popularity of such strategies has skyrocketed — especially in 2021, when growth hackers share their experiences and methodology at every startup event. Even bigger companies like Uber, TikTok, and Shopify have Growth Hacking directors and/or dedicated teams.

Advantages and disadvantages of Growth Hacking

There are several clear advantages to Growth Hacking:

However, in recent years, Growth Hacking has been criticized for promoting quick easy fixes instead of developing an in-depth marketing strategy. Some people believe that Growth Hacking is just general marketing with a trendy name.

Because of these criticisms, some specialists started calling themselves growth marketers. It also helps them distance themselves from the connotations of the word hacker that is mostly associated with cybercrime and IT safety.

That said, the term growth hack can be misleading. Product teams are more likely to concentrate on a deep understanding of data collected from the sales funnel, identifying its weak spots and optimizing each step to improve conversion rates. In short, Growth Hacking is usually about analyzing users and ensuring step-by-step that they get a flawless experience at all touchpoints.

Surely, a good growth strategy requires product-market fit. If a startup is trying to develop and optimize a product that has not yet found it, then it basically puts the carriage before the horse.

Difference between marketing and Growth Hacking

Growth Hacking and marketing are very similar processes, and many people confuse them or see no point in singling out a new term. After all, isn’t all marketing about development? However, there are a few subtle but important differences.

Growth Hacking is similar to marketing as its ultimate goal is to attract more customers, making them purchase a product or service. However, since the term has become popular in the startup community, Growth Hacking mostly relies on techniques that don’t require a huge budget.

Growth Hacking commonly combines marketing, optimization, and innovative development to automate a company’s growth while having a small budget. For example, setting up automatic notification emails or creating easy-to-fill website forms would be typical as growth hacks.

In the table below, you can see the differences between Growth Hacking and marketing. 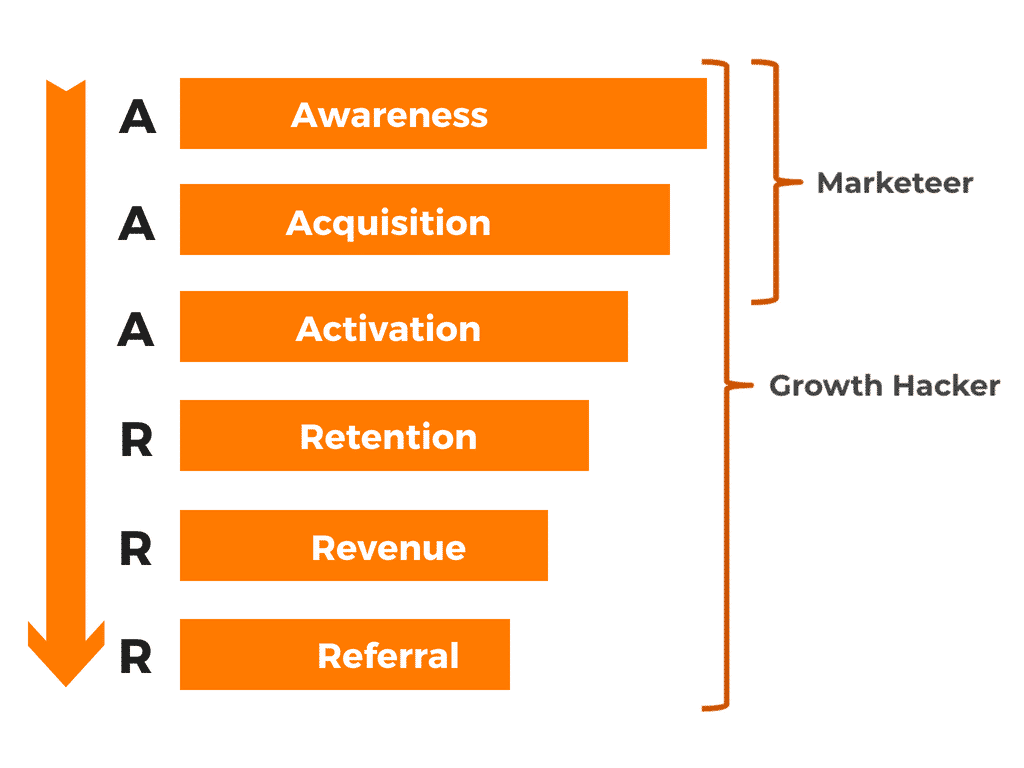 Awareness and Acquisition are the main steps of the funnel for a marketer. However, a Growth Hacking specialist deals with the whole funnel, including Activation, Retention, Referral, and Revenue.

The term growth hacker was also coined by Sean Ellis. In a 2010 blog post, he wrote that “a growth hacker is a person whose true north is growth. Everything they do is scrutinized by its potential impact on scalable growth.”

“An effective growth hacker also needs to be disciplined to follow a growth hacking process of prioritizing ideas (their own and others in the company), testing the ideas, and being analytical enough to know which tested growth drivers to keep and which ones to cut. The faster this process can be repeated, the more likely they’ll find scalable, repeatable ways to grow the business.” — Sean Ellis, 2020

Thanks to this quote, the link between Growth Hacking, A / B testing, and optimization becomes obvious. Growth Hacking is based on empirical and analytical data, that’s why all hacks need to be tested to see what is working and what isn’t.

The most important Growth Hacking skills

A growth hacker needs to work as quickly and independently as possible. Therefore, at least minimal skills in programming, design, and data processing are necessary. You don’t have to be an expert at everything, of course, but growth hackers must understand the basics to be able to do most of the work on their own.

It’s safe to say that a growth hacker needs a wide range of not only general skills but highly specialized ones as well. This table represents all groups of skills an effective professional must possess.

Below, you can read Growth Hacking case studies using the examples of the most well-known companies.

Dropbox was one of the first companies to turn their customers into another channel for acquiring new users. The Dropbox team offered 250MB of extra space for each friend who signed up. At the same time, the process of sending referrals was made as easy as it could be. You could send an invite to a friend via Facebook or Twitter, or import your email contacts to send them an automatic invitation.

The success was tremendous. Dropbox has grown from 100,000 users at the end of 2008 to 4 million users at the beginning of 2010. At the peak of the referral program, users sent up to 2.8 million invitations every month. As a result, the conversion of this viral strategy has decisively surpassed most distribution channels.

In its early years, Airbnb entered into a partnership with Craigslist, at the time the largest forum for people to post ads, rentals included. Thus, Airbnb’s target group was the most active part of Craigslist’s audience.

Airbnb started posting its offers on Craigslist with a link to its platform, encouraging potential tenants to visit the Airbnb website for more information. Newly attracted users continued to use Airbnb.

By the way, all the ads at first were placed manually. But then the team created a bot that generated automatic offers on Craigslist and thus acquired customers non-stop.

Hotmail is the first free email provider. To expand its user base, the company embedded the phrase “P. s. I love you” with a link to its website into each email that users sent via Hotmail.

Those who found it interesting visited the website and switched to Hotmail, as its mailbox was free. In 18 months, Hotmail went viral and acquired 12 million users. By the way, the Internet at the time had only 70 million people in total.

Paypal wanted to embed a payment integration on eBay in order to receive transaction fees. However, eBay was not interested in the offer.

Coming up with another strategy, the Paypal team started personally approaching the biggest eBay sellers. They were buying their goods and asking amidst transactions, “Can I use Paypal?” At that time, the sellers were not familiar with the service, but it was clear: without such a payment option, they could miss a bargain.

Each seller required eBay to embed Paypal payments. When there were enough inquiries, eBay noticed the growing demand and finally approached Paypal with an offer.

Growth Marketing is a relatively new approach that focuses on business development and relies on empirical evidence heavily.

Growth Hacking is often associated with startups and small businesses, i.e. financially constrained companies that need quick results. But in reality, this concept is scalable and can be applied to any online business looking to attract and retain an active user base.

Growth Marketing professionals are called growth hackers. They systematically explore new development opportunities for every stage of the funnel, from Awareness to Revenue and Referral.